Rakower Law PLLC is investigating claims on behalf of investors of Renren Inc. (“Renren” or the “Company”) who held shares of Renren in June 2018. (NYSE: RENN) This investigation concerns an action pending in New York Supreme Court, New York County entitled, In re Renren, Inc. Derivative Litigation, Index No. 653594/2018

The action includes allegations that Renren’s officers and directors breached fiduciary duties owed to the Company in connection with a series of transactions in which Renren’s investment portfolio was transferred to Oak Pacific Investments (“OPI”) in exchange for an inadequate cash dividend paid to certain minority shareholders who did not receive shares in OPI. In a recent decision, the court concluded that those Renren shareholders as of June 21, 2018 who received dividends in connection with the OPI transaction are entitled to recover on any judgment or settlement in the action.

Rakower Law PLLC represents an investor with sizeable Renren holdings as of June 21, 2018 who intervened in the pending court action. If you held Renren common stock or American depositary shares (“ADS”) on June 21, 2018 and received a cash dividend as a result, you are advised to contact Michael C. Rakower at mrakower@rakowerlaw.com or (212) 660-5550 to obtain additional information regarding this investigation. 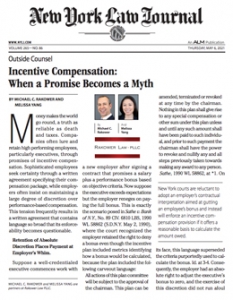 Partners Michael Rakower and Melissa Yang published “Failing to Heed ERISA’s Claims Procedure: A Fast-Track to Court and De Novo Review” in the November 5, 2021 edition of the New York Law Journal.  The article explores the consequences of an administrator’s failure to follow the claims procedure of an ERISA-governed benefits plan.  First, the administrator’s neglect permits claimants to skip their plan’s internal appeal process and go straight to court.  Second, it shifts the court’s standard of review of a benefits denial from arbitrary and capricious to de novo.
Chambers Ranks Michael Rakower among Top Commercial Litigators in New York
In its 2021 rankings, Chambers USA has identified Rakower Law partner Michael C. Rakower as one of New York’s top commercial litigators. According to Chambers, “[I]ndividuals ranked in the New York General Commercial Litigation tables have secured their positions through consistently demonstrating their prowess in complex business disputes.”  Interviewees remarked that Michael was “[e]xtremely intelligent and professional,” and "an outstanding advocate and great writer. You'd want him in the courtroom with you."  Recognizing that Michael focuses on “individual representation in diverse commercial disputes,” Chambers noted that Michael is a “particularly strong choice for the litigation of executive compensation claims.” Michael is one of only 90 attorneys ranked in this year’s guide. CLICK HERE to see Michael’s Chambers USA profile.
Partners Michael Rakower and Melissa Yang Published in New York Law Journal 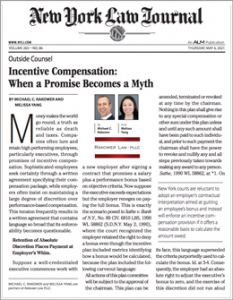